Everything Cloud at Dell EMC

The latest release of EMC Storage Analytics (ESA) for VMware vRealize Operations Manager went GA May 2nd 2016, and among the many new features and supported objects is EMC Avamar.

This post will walk through the installation and configuration of the Avamar Adapter in vR Ops and show some of the available Avamar dashboards.

As shown above, where the ESA vCenter adapter is named EHC Cloud vCenter, this adapter instance does not pull in any metrics, it's only job is to map the relationships between the EMC adapter components and the VMware vCenter objects. Make sure to add the EMC/vCenter adapter first!.

Once the EMC ESA itself has been installed, to add the required Adapter for Avamar, in the vR Ops Admin UI go to Administration > Solutions, select the EMC Adapter and click the Green + icon

Note that Avamar must be running v7.2. I tried to configure this on Avamar v7.1.1 but couldn't get the connection to succeed!

Once configured you should see the Adapter collecting and receiving, as shown below:

So now onto the good part, using the Avamar Dashboards in vR Ops, which can be accessed from the Dashboard List drop-down menu, as shown below:

There are 4 Avamar dashboards available:

The Avamar Metrics dashboard provides the user with the ability to select from the available Avamar objects and view the related metrics. 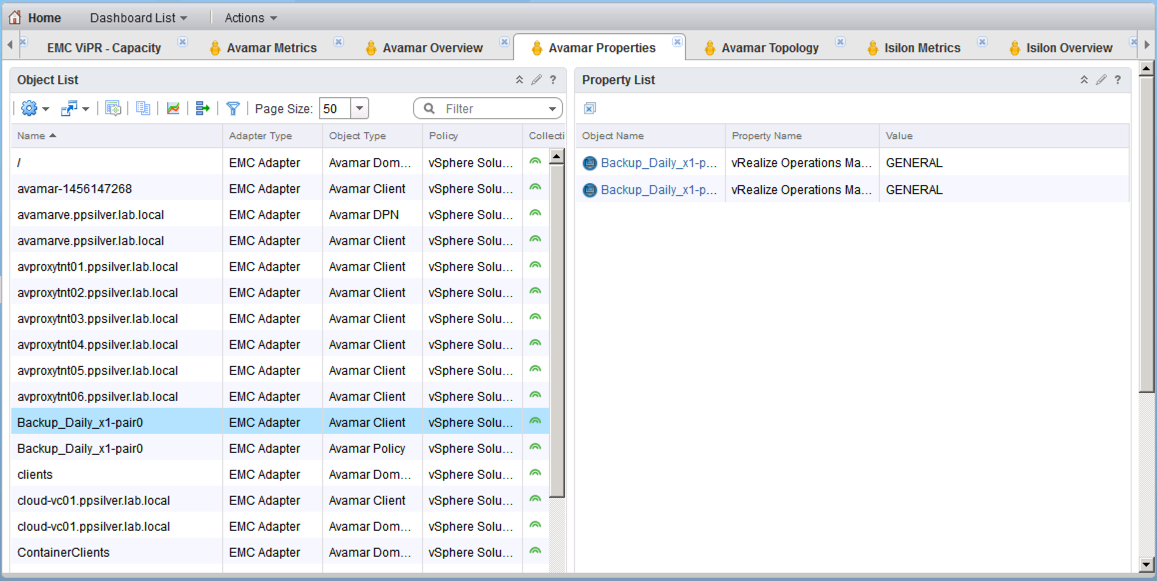 The Avamar Properties dashboard displays every object discovered and monitored by the Avamar Adapter. The user can discover/view the Properties associated with each object and drill down for further detail.

The Avamar Topology dashboard enables the user to select any of the discovered Avamar objects (e.g. Avamar Client), and view their relationship with other Avamar objects (e.g. Backup Policy/Group) as well as associated VMware vCenter objects such as the protected Virtual Machine. The overall topology mapping and relationships of the Avamar adapter instance are as shown below (taken from ESA Admin Guide): 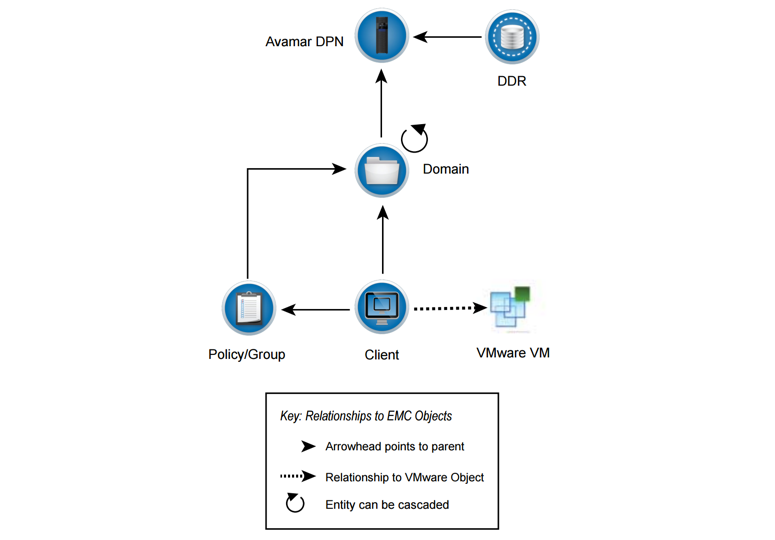 What this diagram illustrates is the relationship(s) between any of the discovered Avamar objects. So if you select any one of them, you will see the associated parent/child object or VMware relationship. All of these Avamar objects are available for any vR Ops user that wants to create their own custom dashboards.ESA/VMAX customers, go look at the great VMAX-orientated ESA 4.0 post from my colleague Drew Tonnesen here.

The ESA v4.0 is supported right now with vR Ops v6.1 and v6.2.0a. From an Avamar perspective, only Avamar v7.2 is supported.Existing ESA/VMAX2 or EMC/VPLEX customers looking to upgrade to ESA v4.0, or to install new, should be aware that ESA v4.0 no longer provides support for VMAX2, and only supports VPLEX GeoSynchrony v5.4.1.